Eliminating the Pervasiveness of Guardianship 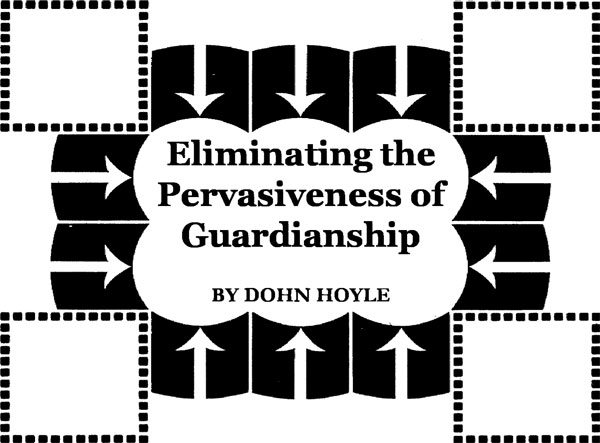 The timing is right to change the current pervasiveness of guardianship. We have moved away from parents and professionals making decisions about placements for people with disabilities in homes, facilities, and day programs. The principles and practices of person-centered planning and self-determination give us the tools to support individuals with disabilities to have the lives they want in the community. This change bodes well for rethinking our reliance and benign attitude towards guardianship. There is clearly a dichotomy between guardianship and self-determination or person-centered planning. As Kathy Harris points out in her article, Making Guardianship Unnecessary, “The imposition of guardianship is the total antithesis of self-determination principles.”

Reasons to be optimistic about changes in this regard include changes in our language and our practice. As we make these changes, the current overemphasis on guardianship cannot go unchanged. Supporting and accommodating individuals, rather than caring for them, changes how we view and deal with perople with disabilities. Accommodating an individual’s disability and assuring the supports they want and need to live, learn, work, play and participate in their community projects a different image -- an image incompatible with guardianship.

Congregating people and segregating them established a view and mentality, emphasiz-ing differences and deficits. The power of including people with disabilities, based on the accommodations and supports they need as an individual, instead emphasizes the traits and qualities we all share, as well as the strengths and capacities of each person. As people with disabilities are supported to live in their own places, contribute or enter the workforce through customized employment and truly participate in their own communities, guardianship will be seen as increasingly incongruent.

Running contrary to an optimistic view of the timing of this issue of TASH Connections are some very discordant items. The first of these has to do with the wholesale trampling of the due process rights of people with disabilities (as well as those who gain disabilities with age) when they are the subject of guardianship proceedings. Many persons are not even present in court as their rights are removed. It is near automatic in many places for the subjects of guardianship proceedings to be excluded from their own hearings.

Representation for those who are the subjects of guardianship petitions is weak, if present at all. If the court appoints an attorney, he or she typically has no back-ground in disability, and does not wish to upset the court or take up much of the court’s time. This is especially true if they would like subsequent appointments by the court. Judges and attorneys blur the role of guardian ad-litem and act in a very paternalistic manner. The brevity of hearings, usually only a few minutes, speaks volumes about the lack of due process and care with which guardians are appointed. Lady Justice, blindfolded and evenhandedly weighing evidence and individual rights, is clearly absent from most courtrooms during guardianship proceedings.

Some would argue that this problem should be addressed through legislative or legal action. I disagree. Many states have near model statutes on guardianship. Each calls for due process, most for limited or partial guardianship and some call for guardianship to be determined necessary. At least one goes so far as to require the finding of necessity on the record.

Despite good statutes and language, rights are ignored when it comes to practice in many courts. Due process apparently would take too much time and to what end. The person would still have a disability. Sadly, necessity is seldom viewed in light of available, viable alternatives. Therefore, the overwhelming majority of petitions filed for guardianship result in the appointment of a third party as guardian for the individual with a disability (or the person who is aging).

One solution to the problem might be to slow down or stop entirely petitions to the courts. While this sounds simplistic on its face, it is anything but simple. It will require an education campaign -- a campaign aimed first at parents and family members and, subsequently, at professionals and others in the field. I am resigned to the fact that this will be a long term project. What makes it important, of course, are the lives of people with disabilities, most of whom will live well past their parents’ lifetimes.

My experience is that, in most instances, parents’ first instincts are correct. Upon first hearing about the subject of guardianship, parents are likely to ask “why?” or “why would I do that?” What follows, in an atmosphere of guardianship being the norm, is a barrage of information, including considerable misinformation. Well intentioned, if not particularly well informed, professionals begin pronounce-ments of mantras which they have heard, usually ending in a chorus of “you must do it,” “you need to do it,” and a list of horrible things which could occur “if you don’t do it.” The “it,” of course, is seeking and obtaining guardianship for their adult or soon to be adult son or daughter.

The question I think needs to be asked is, “who has the most power in that relation-ship?” Clearly, it is not the now powerless person with a disability. Nor is it the parent as guardian. That leaves the court, to whom the parent must report and must satisfy, and who has the authority, albeit infrequently exercised, to replace a parent with someone else as guardian of that parent’s son or daughter.

Professionals wield amazing power to be able to convince parents to do such a thing. Clearly, one reason they are able to do so is a lack of information about or planning for the future. Prior to making a recommenda-tion for such a drastic step, once which holds tremendous long term implications, one would hope professionals would help parents understand the consequences of such a step and carefully weigh their options in light of same. The short term involvement of professionals, when viewed in light of the lifetime commitment of parents, mitigates against true long term planning. It also means a lack of awareness of how current recommendations/actions will affect persons with disabilities and all aspects of their lives far into the future.

School professionals, for example, typically have little understanding of life for people with disabilities, and even less contact with them as they live some thirty to thirty five years beyond their parents’ lifetimes. Yet, professionals blithely make the recommendation to seek guardianship without such understanding and without knowledge of the myriad of alternatives to guardianship which don’t remove a person’s rights. Making a recommendation for guardianship without either is inexcusable.

IDEA ’04 (IDEA) mandates that a student learn of his/her rights and responsibilities one year before reaching the age of majority. One can expect that this will provide an opportunity for the relevant school personnel to recommend petitioning the courts for guardianship. Parents will be told and frightened into believing they will lose the ability to control their child’s educational program and even to receive information regarding their child unless they become their son or daughter’s guardian.

This time could, and I believe should, be spent instead with the school and parents working collaboratively with the student towards such outcomes as self-determination, employment options, transitioning to post-secondary education alternatives, and the like. And, if necessary, preparing the alternatives to guardianship for the student for when he/she does reach the age of majority.

This is a change that will require specific education for both parents and the professionals who work with their son or daughter. Information on the various alternatives to guardianship and which are appropriate, if any, for a particular student, need to be provided to both audiences. Examples of the methodologies, instances of and experiences with each are especially useful. It is also important that parents and professionals see current possibilities and the outcomes we should now expect. Then it is possible to align the alternatives with a desirable future. This also makes it clear why unintended consequences of guardianship in the future are unacceptable.

This challenge/opportunity is one which is about to be realized. Should we be able to mobilize in time, we will be able to prevent many needless petitions which will otherwise lead to many needless and possibly detrimental guardianships. We have no time to waste.

Guardianship is seldom, if ever, necessary. It is incongruent with what people with disabilities, regardless of severity, want and needlessly impinges upon individual rights as well as our obligation to honor a person’s preferences. It represents an outmoded, outdated methodology and, in keeping with TASH’s position on the subject, is contrary to TASH, and I would hope, your values.